Crewest is an iconic graffiti gallery in the heart of Downtown Los Angeles, and the first Los Angeles gallery devoted exclusively to graffiti art, founded by Man One, the graffiti muralist.

In Top of the Dome show for Dia de Los Muertos, I built a plaster skull `Skull Bank Hamlet` in collaboration with Body by Des. The foundation for this sculpture is the play Hamletmachine`, derived from its original dramatic source `Hamlet`, in which Hamlet suffers from schizophrenia. He is split in dual personalities, as a result of being unable to cope with the capitalism of the western world, and failed revolutions.

`Skull Bank Hamlet´ is cut it in two pieces, divided by a glass wall. A metaphor of Hamlet's splintered personality like described in the experience of schizophrenia. The see-through glass wall illustrates a separation of a fragile mind, resulting in the sensing a foggy wall around one's brain.

Skull Bank is a money saver, containing humans' obsession with money, lit with a burning bloodred light of desire inside.

Further, I also developed `Skull Bank Hamlet´ with the intention of it to be placed in Ny Carlsberg Glyptotek Museum´s sculpture department of ancient European thinkers, located in Copenhagen. In addition, this installation consists of two paintings. The first painting, `Consequence of Thoughts´, is a diptych, visualizing a separation of the two brain halves. The motif is electrical signals of thoughts. The second painting, `What is Real´, plays with paradoxes. It contains one word; truth, written in the ancient Vedic language Sanskrit. An x-rayed brain placed in the ocean, inside an embryo, the early stage of biological beings. Purple is the colour of spirituality. - by Birgitte Moos 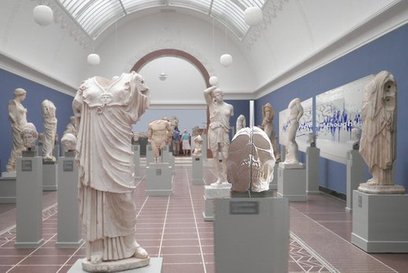 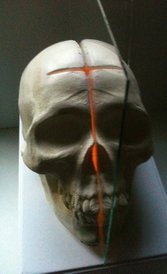