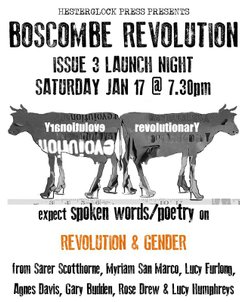 THE SHORT ART STATEMENT for "WHITE COWS" by Birgitte Moos

"White Cows" was originally created as five site-specific, interdisciplinary art installations to be placed in storefronts located in Copenhagen´s Meat Packing District in 1996, as a commentary on that Denmarks first annual Fashion Week was going to take place in the Meatpacking District in The Hall of the Axe, a former slaughterhouse.

How ironic is that! I found this scenario with fashion models in a slaughterhouse quite contradictory as ’meat’ is not an uncommon synonym for females. Yet the way cows and pigs were and is treated both during farming and at slaughterhouses were unacceptable in my point of view. So the project is an anticommercial for the event, and a commentary on animal welfare. At that point I´d been a vegetarian, in between vegan, for more than ten years.

The essence of the "White Cows" project is complex, as it deals with the double meaning of factory farming and an obsession with female beauty in literature, media, and fashion. A comment on female beauty and the methods and extent used, to which people will go to in order to achieve this: Nanotech for life-extending and body-beautiful surgery, future DNA manipulation, beauty products containing animal products… Thus, the cultivation of beauty is stronger than responding to the horror of how we generally treat animals, even before we eat them!

The mirrored "White Cows" twin metaphor is derived from Jaques Lacan’s "Theory of Mirrors" in which he describes babies' self-recognition.There is a certain model for classic beauty that is copied and multiplied to benefit corporate financial hierarchy. And women we do this by ’free will;’ a narcissistic self-adoration, mirroring ourselves in other women’s eye-catching appearance.

"White Cows" started in Copenhagen´s Meat Packing District. Then travelled to L.A. where the project has been shown at various locations, such as at Los Angeles Municipal Art Gallery (LAMAG), Barnsdall Art Park L.A., Art Share Gallery in Downtown L.A.´s Arts District, as a solo pop-up Installation at Jess Projects, 3217 Beverly Blvd., L.A., Bedlam Gallery, L.A., Hangar 1018 Gallery, L.A. and at Hotel Fox in Copenhagen. Furthermore "White Cows" has been on display in the streets of Seattle, Portland, San Francisco, Oakland, Phoenix, Bristol and in London. 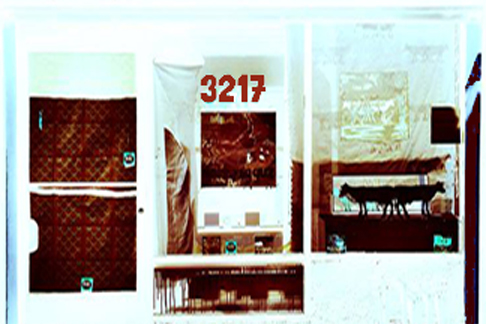 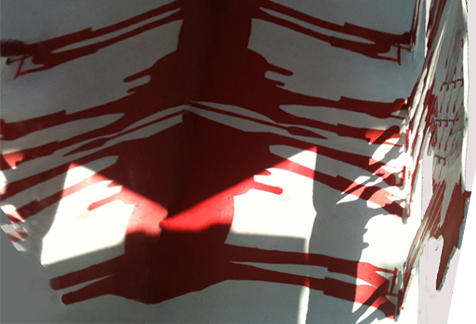 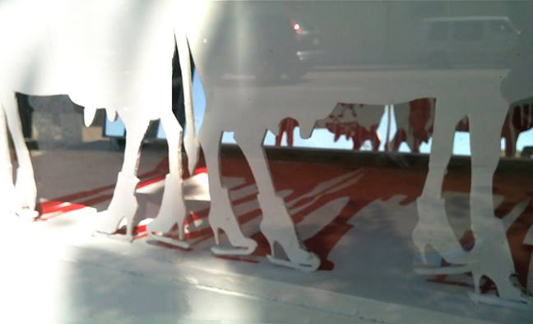 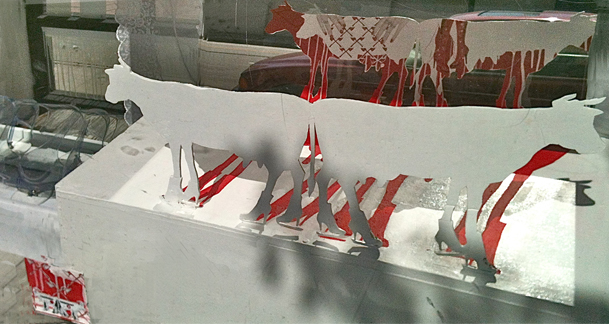 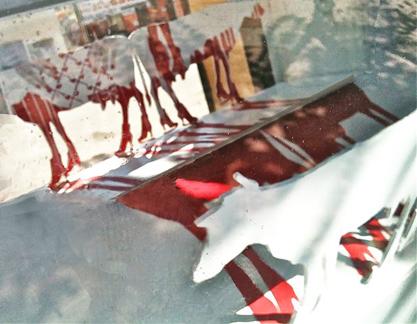 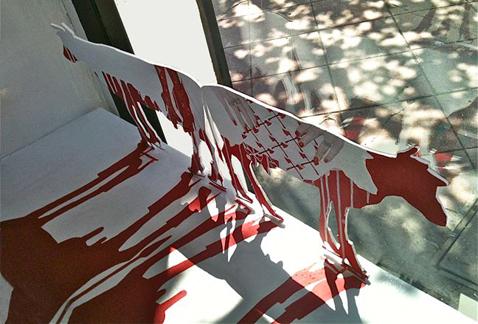 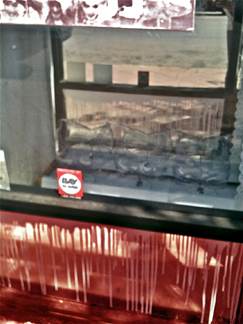 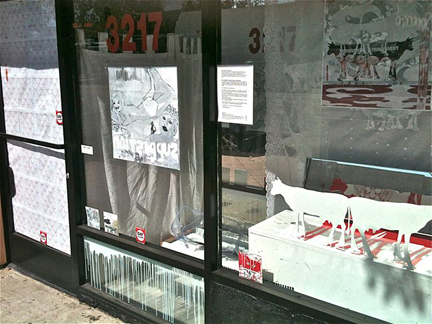 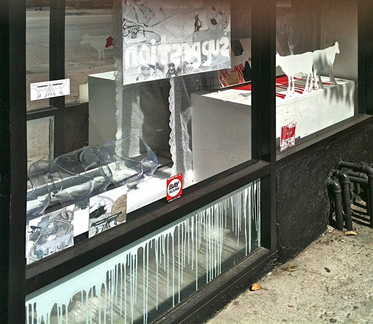 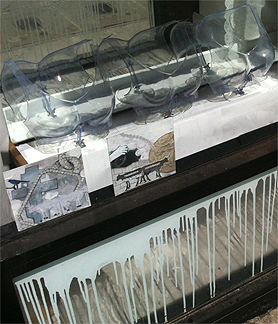 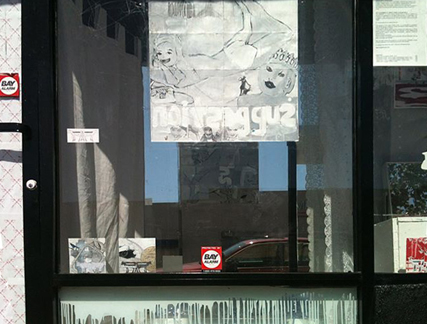 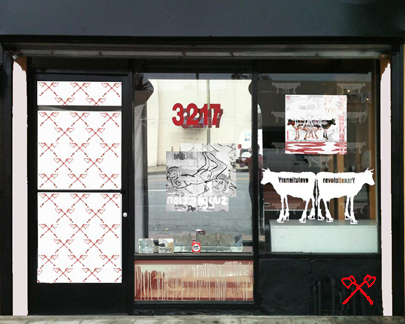 This particular installation at Jess Projects LA is a no-cost recycler-installation created of found materials in the neighbourhood and in the gallery building.

The works on display are inserted in a community and area known as a gang territory on the intersection of Phillipinotown, Silverlake, Downtown, and Koreatown.

The cows are placed on synthetic grass, and the walls are covered with large sterile white glass squares, painted partly red and dirty as metaphors for blood and muddy soil. The back-projection shows a video illustrating stress hormonal responses to fear, as a reference to the animals' sufferings when brought to the slaughterhouse.

In this tableaux, the "White Cows" mirror theme is seen as oversized, extra tall and skinny cows. They are placed in high heeled boots, with a backdrop of repetitious and identical images of axes.
In an art historic context, the project refers to both Damien Hirst's sculptures in formaldehyde, and surrealism.

These cows are extended further, to the grotesque, headless over heels, placed on iron bars as seen in factory farming environments. The walls are drenched in blood and as backdrop image is a huge axe. The ceiling is covered by a Danish flag, as one of Denmark's main sources of income is through the production of meat.

Identical catwalk models, standing still on a black rubber propel, while the floor is covered in a pool of blood (red paint). The back wall is fenced by tall metal bars, with reference to imprisoned animals and metaphorically indicating the concept of stereotypes of frozen beauty ideals. The wall covering consists of white tiles, typically seen in slaughter environments.

Again, identical catwalk models, dressed in cow skin as fashion and placed on window display, in which walls and ceilings are covered with cowskin squares.

Oversized cow sculpture on turntable, and back-projection of video with imagery of microscopic research into cell structures and blood vessels etc.

"White Cows on Acid". A scrabble that might end up as a sketch for a new painting.

1 _ a sudden upsetting or surprising event or experience.

2 _ an acute medical condition caused by such events as bacterial infection, an allergic reaction or sudden emotional stress

3 _ a disturbance causing instability in an economy

1 _ cause (someone) to feel surprised and upset 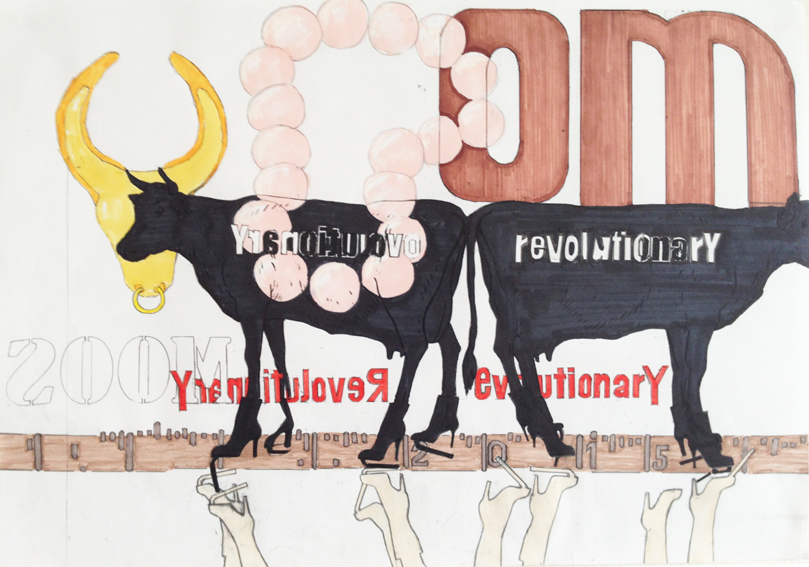 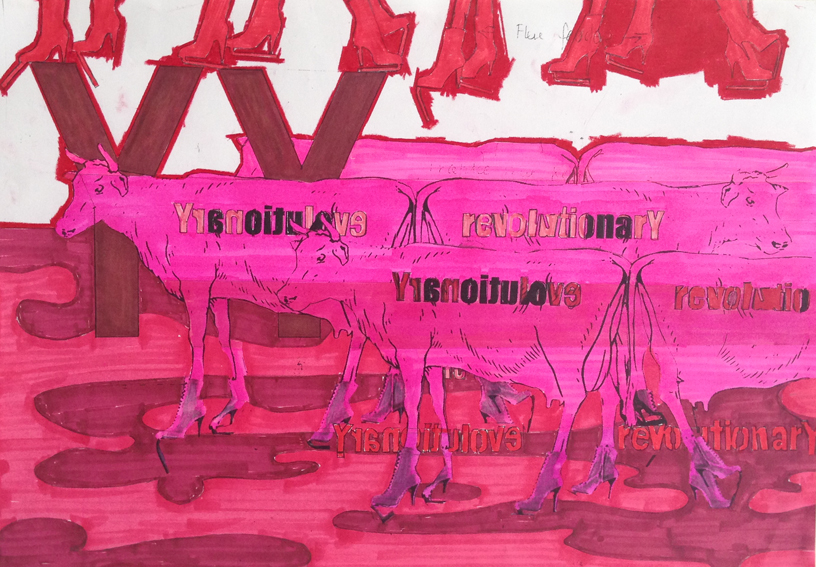 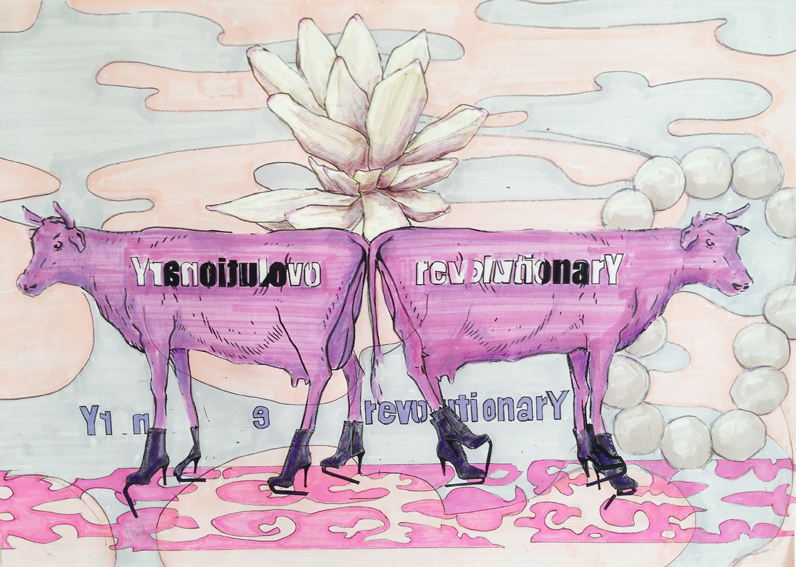 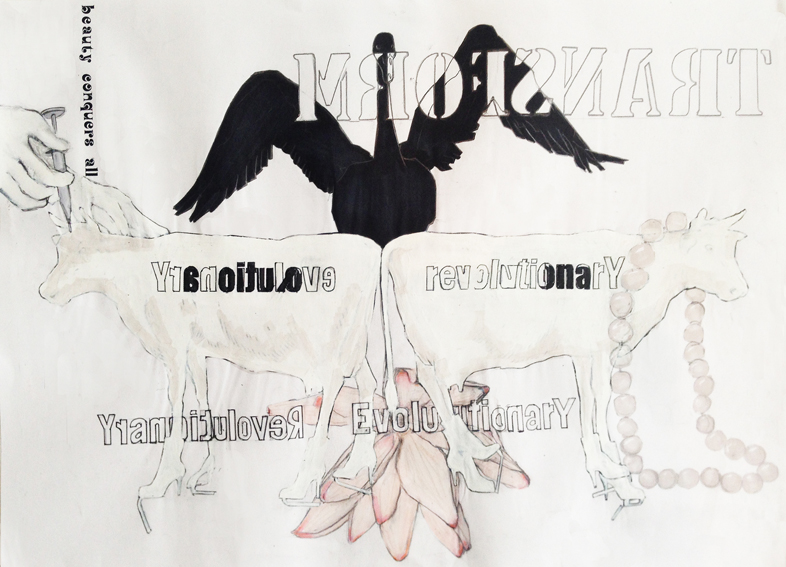 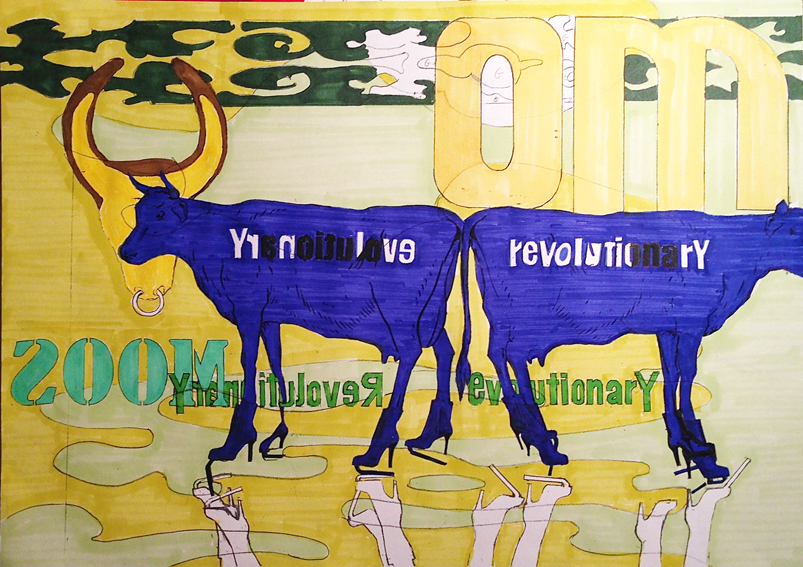 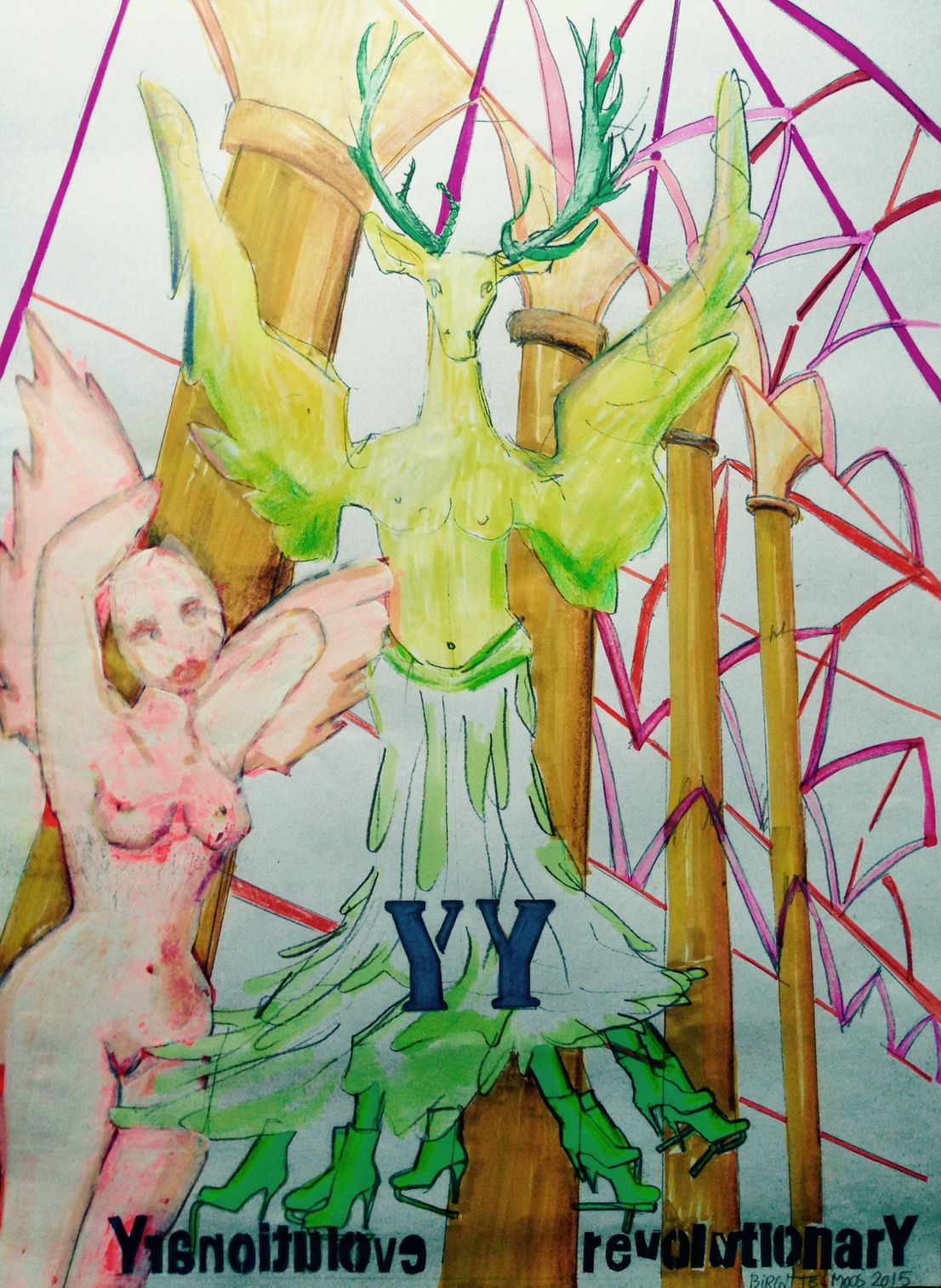 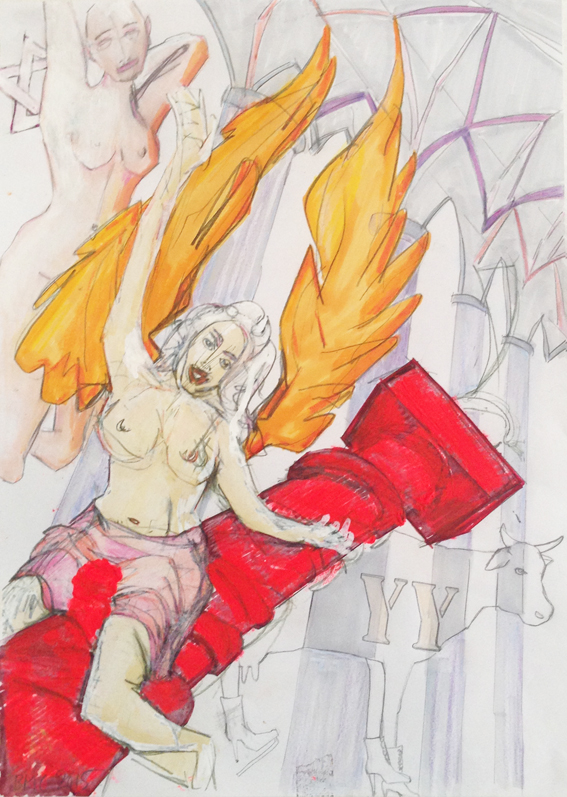 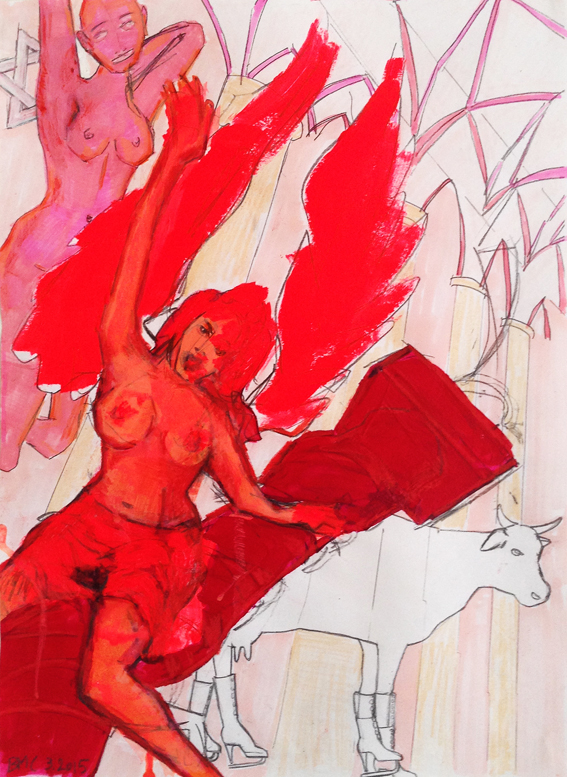 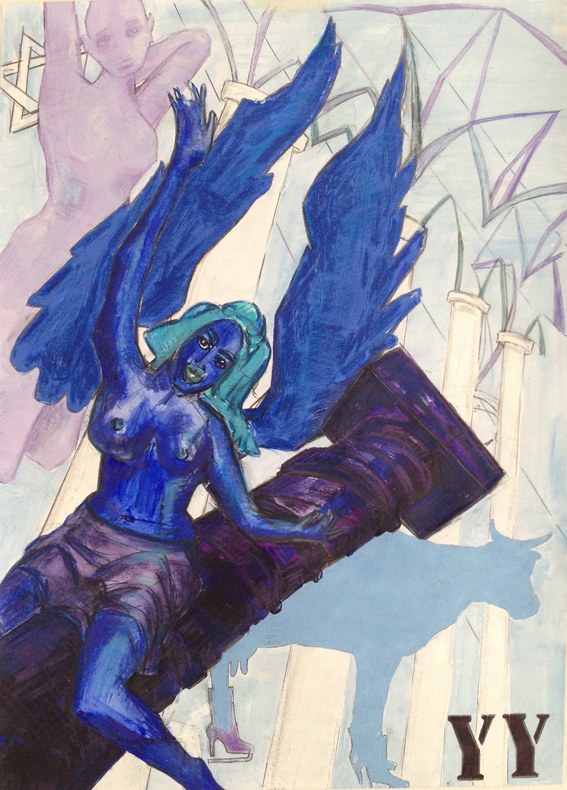 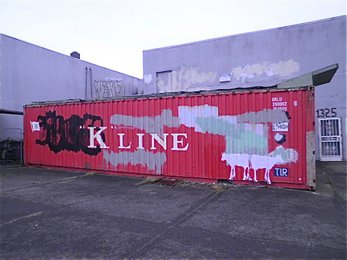 "White Cows" travelling. They are very curious and get around... 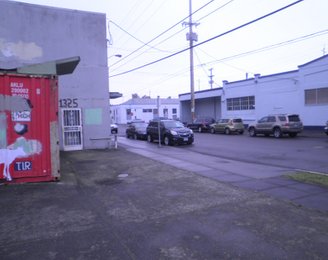 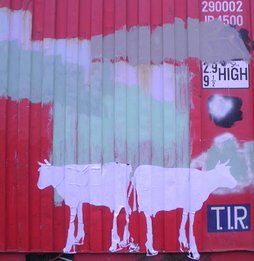 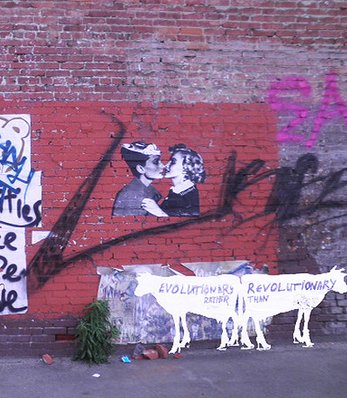 "White Cows in a field" - on vacation in The Arts District, Downtown LA 2013 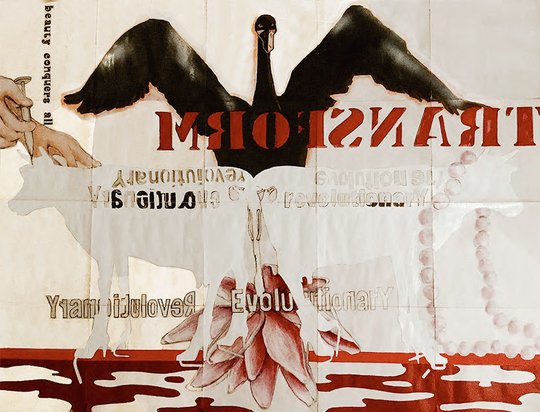 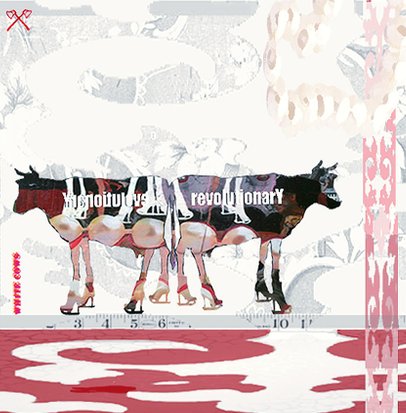 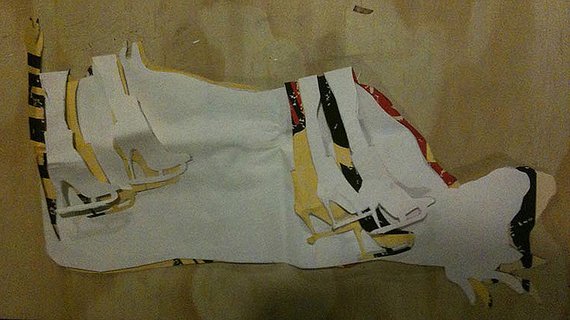 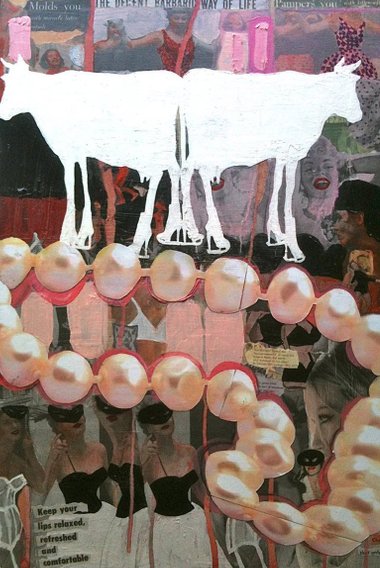